Cheesecake, Jr. (or Charles Cage Williams, Jr.) is the main character of the Cheesecake, Jr. comic strip and the son of Charles and Cathy Williams. He has appeared in every many comic since the original Cheesecake comic strip in 2008. Although his comic is no longer running, he still makes cameos every now and then.

Cheesecake, Jr. was "born" on January 24 (occassionally 23), 1997. It is often disputed whether he was born or if he actually hatched from an egg, like normal dinosaurs. He seemed to have been rascally and mischevious at a young age; in fact, at age 2, he ripped off his father's moustache. He wasn't potty trained until the age of four, when he moved away from North Platte, Nebraska to New York, New York. Two months later, terrorists hijacked a few airplanes and crashed them into the World Trade Center, just a few blocks away from where CJ lived. So his family decided to move away to Aljazak, New York, about 286 miles away. He seemed to have loved the small town, and adopted some rural-tomboy lifestyle. However, another two years later, he moved to Albany, and got exposed to video games and fettucine alfredo, so he abonded his former personality and changed to his current personality.

In 2007, CJ's family moved back to New York City, and CJ met his friend Ron Hinkleton. They started having video game contests and played to their hearts' desire, and also pulled pranks on CJ's parents. Three years later, they moved to Dinosaur City, West Virginia. He met his friends Michael Adams and Nick Richards, and they started having many kooky adventures like being attacked by ice cream machines and traveling in time.

In the future, Cheesecake Jr. began working at Nacho House. He decided he had enough of his life as an unadventurous, boring child. He got into politics, and ran in the 2020 Mayoral Election on the Democratic party. He barely won the election, and later ran for senator of West Virginia. He won again, but again, barely. Finally, he ran in the 2040 presidential election, and won (again, barely). As president, he actually ended global warming and deforestation, and led the country through World War 4. He died at the age of 97 in 2094. He is renowned in the future as "The Dinosaurian Hero."

When Cheesecake, Jr. first appeared in the comic strip, he was bald and wore a helicopter beanie. He adopted the "cool" look later on, wearing a purple hat and sunglasses. That look was later dropped, and in 2010, he adopted blonde hair. He then grew some stubble which would eventually become a moustache, and then began wearing clothes more. The pattern is that he's becoming more and more human like.

He is also known for his love of Italian food, not unlike his creator. His favorite is fettucine alfredo, but he also likes spaghetti and ravioli. However, he hates ice cream, especially Nestlé Dibs (which were later discontinued, much to his joy), mainly because ice-cream machines often shot them at him using rapid-fire. He also hates his mother's casseroles.

He is often cynical (a trait that is now cliché) but can also be seen with a bright, friendly, and even childish side. He also has a very mischevious side, often pranking people and listening in on other people's conversations. 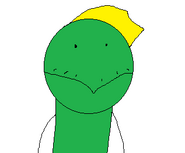 Cheesecake, Jr. viewed from the front. 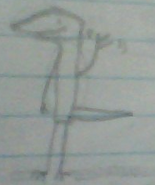 Cheesecake, Jr.'s earlier appearance.
Add a photo to this gallery
Retrieved from "https://cheesecake-jr.fandom.com/wiki/Cheesecake,_Jr._(character)?oldid=4041"
Community content is available under CC-BY-SA unless otherwise noted.